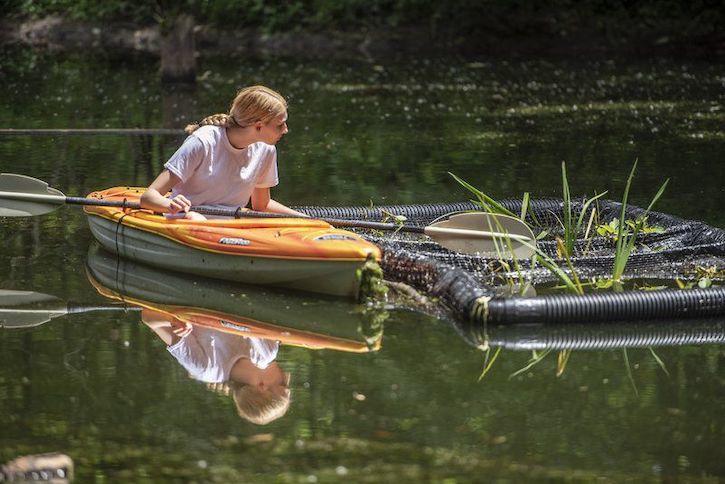 Honors College student Kennedy Ream installed a floating biological island to combat the algae problem in the pond behind her high school in Logansport, Indiana. Photo by Tony Walters. Courtesy of Pharos Tribune.

How do you combat an overabundance of algae? Create a floating biological island.

That’s what freshman Kennedy Ream did after attending the Washington Youth Summit on the Environment (WYSE) hosted by George Mason University, the National Geographic Society and the Smithsonian’s National Zoo as a high schooler in 2018.

The island, which took Ream a couple months to build, is a mass of aquatic plants, foam, netting and corrugated pipes filled with water valves, she said. The environmental science major and member of Mason's Honors College first learned about floating biological islands on an excursion to the Rappahannock River with WYSE. Inspired by Mason speakers who emphasized that small steps could make an impact on the Earth, she said she set out to build one for a pond in need near her high school.

While algae can be a home for organisms, such as bugs and frogs, too much of it can throw off the ecosystem’s balance, creating a disproportionate amount of prey to predators, Ream explained. The plants on top of her island help naturally filter out excess algae and, in doing so, balance out the population of all organisms living there.

“A lot of people don’t realize how much they can make a difference,” said Ream, who said she became very passionate about environmental science at WYSE and decided to apply to Mason after attending the summit.

Ream, whose dream job is to become an environmental scientist for National Geographic, said she originally planned to go to college in her home state of Indiana. But after learning about Mason’s strong environmental science program, its opportunities near the nation’s capital and the university’s high return on investment for students finding jobs after graduating, she was hooked.

“Mason is really good at helping students switch from college to a career,” said Ream, who added that she’s looking forward to the networking opportunities afforded by Mason. “That makes me feel really comfortable that I’ll find [a job] as soon as a graduate.”

Ream said she’s adding a data science minor, which she hopes will help with her future research, and a minor in Chinese. Asia’s unique wildlife—such as the endangered pangolin, which is a scaly anteater—is something she hopes to bring more awareness to in the future, perhaps on a National Geographic expedition, she said.

She said she thinks a program like Mason’s can help her get there and make an impact.

“Our students are immersed in a very distinctive transdisciplinary, hands-on program that unfolds within a learning environment of practicing scientists, leading teachers, writers, policy analysts and a host of other resources—including living collections of endangered species,” said A. Alonso Aguirre, chair of the Department of Environmental Science and Policy (ESP) at Mason. “ESP promises an experience and an education that will be life-changing.”