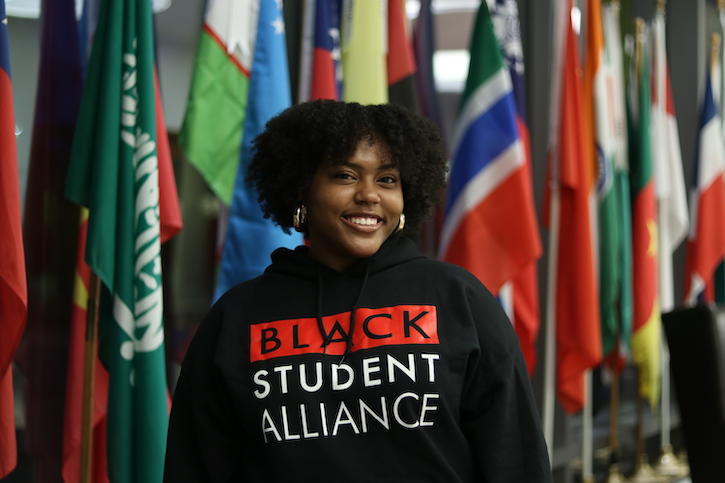 Alexis Massenburg, a freshman majoring in Global Affairs, wants to promote community service as a way to bring students together. Photo provided.

Alexis Massenburg could have done nothing. She could have let the incident at her first football game as a student at Glen Allen High School in Henrico County, Virginia, roll off her back.

But a racist song that played on the public address system before the 2015 Homecoming football game was a catalyst for Massenburg and her friends to take action.

Massenburg started Diverse Hands at Work, an organization that brought students of all circumstances and races together for community service.

The group was called Barrier Breakers at first, a place to start discussions. But soon after, Massenburg, now a freshman Global Affairs major at George Mason University, said she realized “we weren’t doing anything, so I started Diverse Hands at Work.”

The organization distributed Mother’s Day blankets at a local battered women’s shelter and turned Black History Month at Glen Allen High into a month-long event with speakers, a movie showing, mural painting and even a deejay at the annual school assembly.

“We just tried to make the club into something that was for everyone,” Massenburg said.

She said she wants to bring the same energy to Mason, where she hopes to use her membership in the Black Student Alliance “to get everyone involved in community service.”

Massenburg, a member of Mason’s Honors College and a University Scholar, who attends Mason tuition-free, said she originally wanted to major in psychology. But after seeing a speech in Richmond, Virginia, by Samantha Power, who at the time was the United States’ ambassador to the United Nations, Massenburg, then a high school junior, changed direction.

“I like that she stands up for women and advocates for social issues, and in the back of my mind I always thought that was what I want to do, advocate for others,” Massenburg said. “Why not just pursue what I really want to do?”

Massenburg said Mason was the right fit because of the diverse campus and its proximity to Washington, D.C. She also was intrigued by the available five-year master’s programs and study-abroad options.

With two successful older sisters—Chelsea has a master’s degree in public policy from University of Virginia, and Myah is studying chemical engineering at Villanova—and high expectations from Darryl and mom, Chenelle, a pattern was established, one also being followed by sister, Noelle, a high school freshman.

“We did not accept them not doing their best,” Darryl said. “Each child’s best is different, but we encouraged them to figure out what that is and do your best all the time.”

For Alexis, that means getting involved as she did in high school.