Luu, a member of Mason’s Honors College, was among the 410 students chosen nationally as 2021 scholars and will receive a $7,500 stipend that will help her cover tuition and room and board next year.

“My immediate reaction was just shock,” Luu said. “I’m honored and I think it will help open a lot of doors for me as a scholar.”

The Goldwater Scholarship, established by Congress in 1986 in honor of U.S. Sen. Barry M. Goldwater, fosters and encourages outstanding students to pursue careers in the fields of mathematics, the natural sciences and engineering. It is considered the premier undergraduate award of its type in these fields.

The Goldwater Scholars were chosen on the basis of academic merit from a pool of 1,256 natural science, engineering and mathematics students nominated by the institutional representatives of 438 colleges and universities nationwide. Nearly all of the scholars intend to obtain a doctoral degree.

“It’s a great honor to be chosen,” she said.

LaNitra M. Berger, who is Mason’s senior director of fellowships in the Office of Undergraduate Education, called Luu a dedicated researcher and a pleasure with whom to work. 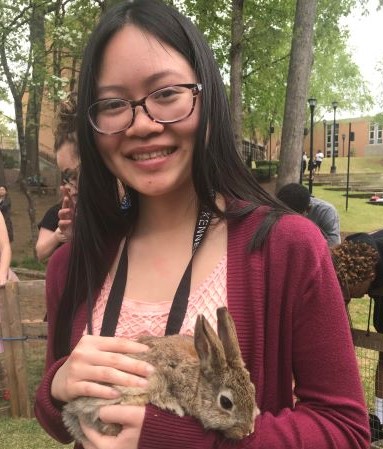 “I am thrilled that she won the Goldwater, and that she represents Mason and its commitment to academic excellence so well,” Berger said.

Luu, 21, who credited Mason faculty among her mentors for their critical help in her application process, is no stranger to academic success. An excellent high school student, she was recruited to Mason as a Smithsonian-Mason Scholar and spent the Fall 2020 semester at the Smithsonian-Mason School of Conservation in Front Royal, Virginia.

“Jackie is an avid and talented young conservationist who has been one of the most active students with SMSC,” said Robert Barrett, the school’s assistant director of recruitment and outreach.

Luu enjoyed her time doing research in Front Royal. "It was great and showed me there are lots of different opportunities in the field and helped fuel my passion for doing research,” she said.

She worked with her mentor, Karen T. Lee, and a committee of advisors in preparing her Goldwater application. A Mason faculty committee selected the university’s nominees for the national competition.

Luu’s research essay centered on work she’s currently doing with Lee on color variations within female green crabs. The two will soon co-author a paper with their findings.

Lee, assistant director for Mason’s Office of Student Scholarship, Creative Activities, and Research (OSCAR) and a member of the university’s Goldwater Committee, said Luu’s selection has made her “proud and excited.”

“This is something that can really be a huge boost to a student’s career,” said Lee, an affiliate faculty member in Mason’s Departments of Biology and Environmental Science and Policy. “This is a big deal.”

The Barry M. Goldwater Scholarship and Excellence in Education Foundation has awarded 9,457 scholarships since 1989.