A debater’s path to Mason 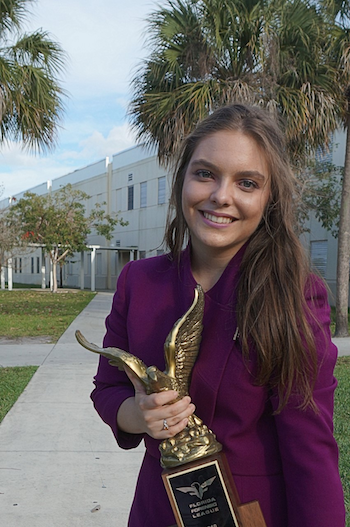 Despite a path to George Mason University that was challenging and, in her own words, “unconventional,” incoming freshmen Juliette Reyes moved on to campus this fall.

The Parkland, Florida, native will be double majoring in government and international politics and conflict analysis and resolution, a decision based on an initial interest in politics in high school that grew into a passion.

“It’s just something that I’m really passionate about,” Reyes said. “And I felt as though getting a degree in government and international politics will allow me to really understand the institutions in which policies are drafted while also getting access to that international affairs curriculum.”

Reyes’ first time on campus was at a summer debate camp with Mason’s Forensics Team, an experience she called “amazing.”

“It’s funny, because when I went to the camp I was like, ‘I’m never going to go here, you know? I’m going to try to go to an Ivy,’ ” Reyes said. “But the more and more I stayed at the camp, the more and more the school grew on me.”

Her high school teachers discouraged her decision to attend Mason, despite her familiarity and fondness for the school.

“I think that was the biggest problem with me going to Mason,” she said. “It was me choosing between a college I really liked, I really had a good connection with, and then everyone else pressuring me to choose a school that was more quote-unquote elite in nature.”

Now that Reyes is here, she has big plans.

As a part of both the Honors College and the Peacebuilding, Justice and Conflict Resolution Virtual Learning Community, Reyes said she is excited to get involved on campus and work with the Forensics Team, which helped inspire her decision to attend Mason, as well as with other on-campus organizations.

“I’ve been in a lot of various writing jobs and publications so definitely joining something like that would be on my radar,” she said. “And if I do happen to have the time, which I probably won’t, I’d like to do Model UN again.”

Reyes wrote for Student Change, a now-closed nonpartisan high school organization dedicated to informing fellow students about the spectrum of politics. She has also written for The New Voice, a nonpartisan news organization, since her sophomore year of high school.

When looking to the future, Reyes is keeping her options open.

She has considered being an international human rights lawyer. Other options are to work as an analyst for the U.S. Department of Defense or for an organization such as the World Bank or the U.S. Institute of Peace in developing countries. She said she plans on using her time at Mason to see “which one fits the most.”