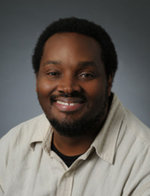 Keith Clark is a Professor of English and African and African American Studies. He earned a B.A. from the College of William and Mary (1985) and a Ph.D. in English from the University of North Carolina at Chapel Hill (1993). He is the author of Black Manhood in James Baldwin, Ernest J. Gaines and August Wilson (Illinois UP, 2002), The Radical Fiction of Ann Petry (Louisiana State UP, 2013; winner of the College Language Association Creative Scholarship Award), and editor of Contemporary Black Men's Fiction and Drama (Illinois, 2001). His latest book, Navigating the Fiction of Ernest J. Gaines: A Roadmap for Readers, was published in Spring 2020 by Louisiana State.  His critical and pedagogical essays and book reviews have appeared in Callaloo, African American Review, The Oxford Companion to African American Literature, Resources for American Literary Study, American Writers V, and Modern Drama.  His teaching interests include Black Literary masculinity studies, the black bildungsroman, and African American LGBT studies. In addition to his academic interests, he is involved in several community service projects related to mentoring, tutoring, and hospice.

Navigating the Fiction of Ernest J. Gaines: A Roadmap for Readers. Louisiana State UP, 2020.

The Radical Fiction of Ann Petry, Louisiana State UP, 2013.

Interview on Ernest J. Gaines on “On the Margin” hosted by E. Ethelbert Miller, WPFW-FM, Washington, DC, April 2020 and March 2018.

"Keith Clark Talks about Publishing in the Age of Covid-19" https://blog.lsupress.org/keith-clark-talks-about-publishing-in-the-age-of-covid-19/