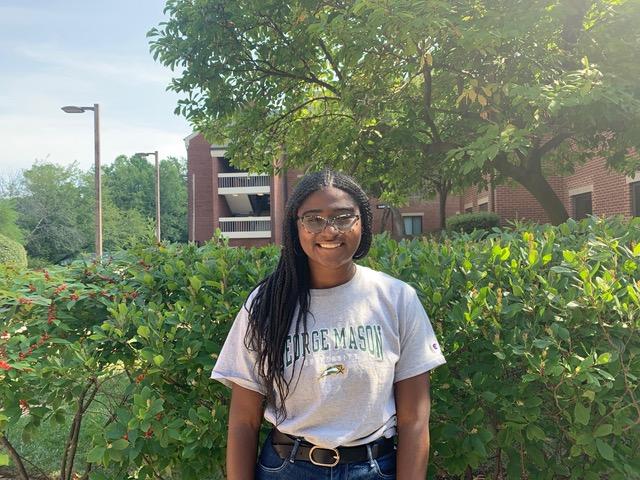 Gabrielle Walker, a freshman in the Honors College majoring in Art History and Spanish at George Mason University. Photo provided.

Gabrielle Walker’s high school outside of Richmond, Virginia, wasn’t very diverse, so she made it a point to be a visible positive role model.

“Being a woman of color, I think it's important for me to encourage other women of color or girls of color and advocate for them, and make sure that they're [vocal] and active within their community,” said Walker.

“I miss them a lot,” said Walker, a freshman in the Honors College majoring in art history and Spanish at George Mason University. “But hopefully during the breaks I'll be able to see them.”

Among the many leadership roles Walker held during high school, one of her favorites was helping the Girl Scout troop with their painting badge and introducing them to artists of color like Kehinde Wiley and Jean-Michel Basquiat.

“I wanted to expose them to artists of color and not just the traditional, Western artists that you see a lot,” said Walker. “I'm a huge advocate for diversity, especially in the field of art history.”

Walker’s interest in the humanities began at a young age. In high school, she was part of a humanities program that placed a special focus on history, art history, English and language.

Mason’s location close to the national museums in Washington, D.C., was a big factor for Walker in choosing Mason. Over the summer, she participated in the Museum Leaders in Training program at the Virginia Museum of Fine Arts in Richmond, where she learned from museum curators and created a teen audio guide for the museum. Her participation in the program led to an internship with the museum.

Natalie Feister, the youth and family programs and events coordinator at the VMFA, said Walker developed proposals for a family day program, a teen program and a performing arts program as a participant in the 2019 teen internship program, all the while assisting with museum evaluation and program preparation.

“Her projects, ideas and proposals were well-rounded and well thought-out,” said Feister. “Her discussion and contribution in meetings and presentations were well-composed, creative and organized. She was a fabulous addition and a very strong asset to the VMFA through these two teen programs.”

In addition to her work with the Girl Scout troop and creating teen programs at the VMFA, Walker was a member of Young Democrats.

“I really liked the diversity at George Mason,” she added. “It’s diverse not just in people, but also in languages and cultures.”

Walker didn’t waste a moment getting involved when she came to Mason. In addition to working as a lifeguard at the Aquatic and Fitness Center, she is already involved in campus groups as the freshman senator for Student Government and a member of the Black Student Alliance and the Student Historian Society.