Honors College graduate Joshua McLean, film major and creator of Lemonjerky Productions, seeks to “create content that connects the world while inspiring other people to do the same.”

In his first year as a Film and Video Studies student at Mason, McLean stepped out of his comfort zone to produce a fellow film student’s senior capstone. “It helped me find what I wanted to do,” he said. “I realized I liked producing, and that was likely the route in the film world I wanted to take.” The experience working on a large-scale project, although stressful, became a catalyst. Creating Lemonjerky Productions was a pivotal moment for McLean and others in his team, and as the brand grows, so does the push to encourage others to create meaningful content.

In May 2019, he produced one of his first films: Goodies. “The film was made on a $200 budget,” said McLean, explaining the ever-present struggle to keep costs low, especially as a college filmmaker. “There was a time one of our actors pushed [another actor] down in a scene – which was not the goal. He ripped his pants, and his knee was bleeding… We had to buy him new pants.”

Still, Goodies is only one project in McLean’s portfolio, Lemonjerky Productions. “Originally [Lemonjerky] was just an idea for a YouTube channel, but now it’s beyond that. It’s turned into this big collaborative effort,” McLean emphasized. He has since produced another award-winning short film that is near and dear to his heart, Please Be Seated. “During my senior year of high school, a friend of mine was killed by a drunk driver and their story was really impactful to me. I knew the story of trying to get that person a seat at graduation was really important to tell,” says McLean. He remembers how the student body worked to convince school administrators, despite resistance. The students were ultimately successfully, which inspired McLean to tell the story when he had the chance. He found the experience of making the film rewarding and meaningful in multiple ways: “It helped me build my confidence in filmmaking. I proved to myself that I could make a film on my own.”

In addition to his own endeavors, McLean produced video content as the Videography Intern for Honors College Communications Team. In his role, he was able to keep his creativity while applying it to a marketing perspective through videos that populate the Honors College website, social media accounts, and YouTube channel. “I was able to take all the knowledge I had from film producing and apply it in a different space. I had a much more holistic approach to filmmaking because I could not only tell a narrative in ten minutes with a short film, but also within a minute or two,” he continued, “Both tasks of production and editing really worked together to help me become a better filmmaker.”

To that end, McLean is always embracing new ways to approach filmmaking. In Fall 2020, he helped produce the narrative short film Chasing the Bulls as part of another student’s senior capstone project; a task made more complicated during a pandemic. “The challenge with this film was doing something during Covid-19 while still keeping people safe.” 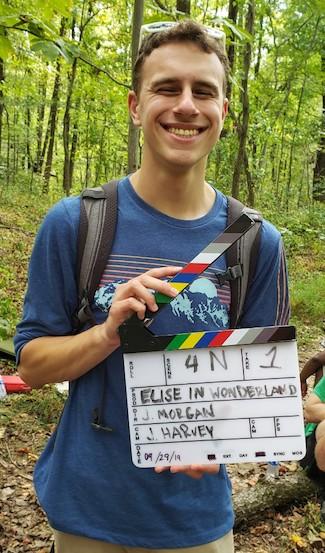 For McLean’s senior capstone, he is making a series bible – in layman’s terms, a script and informative guide – for a limited six-episode pilot series called Hot Springs. His inspiration for Hot Springs is to get out of his comfort zone. “I had originally just wanted to make something really dramatic and dark because I hadn't done anything like that before in my work.” In fact, McLean said Hot Springs is far from what would be expected of his personality as a filmmaker; the plot follows a woman who accidentally murders her husband and flees Arkadelphia, Arkansas with her extramarital affair. Through this short film, he pushes his creativity to build layers of tension between the two characters, who soon become indoctrinated into a cult miles away from the scene of the crime.

“That’s what made it a really good challenge for my project,” said McLean, explaining the complexity of the storyline, set in 1927. “I felt like Hot Springs would allow me to get really creative.”

Lastly, Lemonjerky’s current large-scale project, a documentary about the white supremacist rallies in Charlottesville, Virginia, shares the perspective of a student who witnessed the events firsthand.

Whether raising awareness for current events, supporting Honors College communication goals, or providing a laugh to an ever-growing audience, McLean uses film as a way to proactively engage with the world around him. “It’s fun to entertain people, but film can also be a powerful medium to inspire people, to educate people, and to help people. And that’s why I do it.”

As McLean continues his filmmaking journey, he is welcoming opportunity. “Ultimately I don't know exactly where I'm going, but I love producing content so I’m looking into opportunities that will allow me, in some way, shape, or form to tell stories – from commercials to narrative filmmaking, I’m keeping an open mind.” More information about him and his projects can be found on the Lemonjerky Productions site.