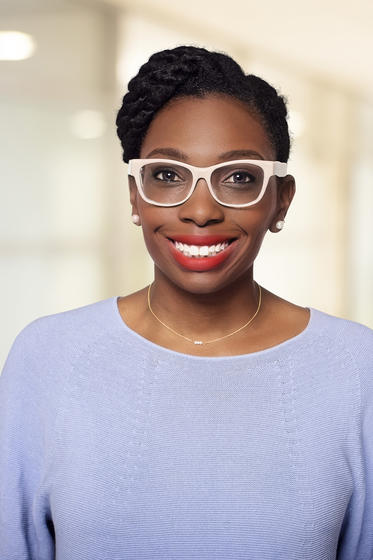 In Damika Barr’s home office in Silicon Valley hangs a pendant that reads, “lift every voice.” As a passionate advocate for equity, Barr (2002) strives every day to rise to that occasion. “I've been able to stay true to what I see as the North Star for my career, through the organizations that I've been a part of, from affordable housing to academic public health law research to then going into a corporate space.”

Barr first became interested in the role of healthcare as a Biology major in the Honors College. “At Mason I took a course called Medical Microbiology, which introduced me to pandemics and public health. It talks about this eerie space that we're in today where something that we can't see infects a large population,” she says, referring to Covid-19. “It really just led me to start taking more classes that talked or thought more broadly about health at a population level.”

Barr's work in the public health field focuses on an important issue: access. “All of my career decisions are driven by access to care,” she explains. Healthcare is not accessible to everyone, especially when there are financial barriers and historical discrimination against Black communities and those of color. Barr wants that to change.

During her time at Mason, Barr was involved with multiple student organizations, including Mason’s collegiate chapter of the NAACP. She cites her membership as one of the reasons for her current interest in equity. “Starting in undergrad, thinking about the work and the history of the NAACP, some of the objectives that we had as student were along the same lines. We're thinking about equitable opportunities.” At Barr’s current organization, she has co-founded two employee resource groups to promote discussions of identity and difference.

When she left Mason, her career aspirations were clear: “I’m going to support companies and organizations that are trying to tackle these population health issues.” What she was less sure of was how to make that goal a reality. She knew she really wanted to work at the National Academy of Medicine, then called the Institute of Medicine, but had her job application rejected.

“I wanted to work there. I remember going in the building in my early twenties thinking that it was a great place. It just took time for me to get to get past that ‘no’ for it to become a ‘yes,”’ Barr explains, “[and] it's not the only organization that I’ve had to interview twice for in my twenties.”

After a second interview with the National Academy of Medicine, Barr got the job. In her role, she conducted research on population health issues related to veterans of the Gulf War. Situated in Washington D.C., a city where “every fifth person is a lawyer,” she soon realized there was a recurring connection between policy decisions and health outcomes. From that moment, she decided it was time to take the next step on the way to the career she wanted.

Four years after graduation, Barr found herself at a crossroads. She needed advice. Should she pursue law or go to graduate school for a degree in public policy? Barr sought advice from one of her first Honors College professors who had taught and advised her in 1988. “I had that level of comfort in going to him and saying that I needed help to make this big life decision,” says Barr. After discussing the choice with her former professor, Barr decided on law school.

She soon was able to bring her legal expertise to the public health sector. First, she worked at AmeriHealth Caritas in Medicaid Managed Care, then committed to living in California as part of Lyft’s new healthcare division – focused on improving access to care.

Barr now works in legislative policy for Verily Life Sciences at the intersection of healthcare, access, and technology – a niche that had not existed when she graduated from Mason in 2002. In this role, Barr helps the company manage policy risks and identify the opportunities related to regulatory changes in privacy protection, data sharing, and connecting data sources for interoperability. “They're trying to take health data to improve lives, and when they talk about improving lives, it's not just some lives – it really should be how we can use data to improve lives for all.” In short, her work answers the question of what equitable data use looks like in healthcare.

Part of the challenge of equitability is how rapidly technology is moving into the public health space. How a product is designed or implemented can play into its potential to cause unintentional harms. Issues like costs or access to broadband are commonly tied to the exclusion of marginalized groups. “It's important for organizations to understand [those access barriers] to build with intention,” says Barr.

Working with clear intentions is important for Barr. Her advice to current Honors College students and recent alumni is to embrace a mission statement that will guide their actions. “I think as a student or any person who's taking that next step, we really get caught up in what that next step looks like. What do the next one to three years look like? It gives us anxiety, and we’re just pushing towards this thing that we can see – what’s more important is what we can't see,” she explains. One way to be okay with uncertainty is know your mission, but be ready to revise it as you go.

Barr still experiences rejection every now and then, but has learned from these experiences to focus on the opportunities ahead. Continuing to follow her North Star, she hopes to expand into work that uplifts community-based organizations by centering equity and access. “It’s a passion area for me.”

She also emphasizes the importance of building relationships. “My closest friends are people that I met at Mason. I have a group chat with four people – we met freshman year,” she shares. “What I took away most from Mason is all the relationships that I was able to build and maintain.” Still making new friends, she adds, “I just connected pre-Covid to the Mason alumni group in Silicon Valley. It’s nice to know there are people connected to you,” even thousands of miles from her alma mater.