On September 22nd, Rebecca Pearcey joined Mason Professor Steven Pearlstein for what would the third conversation in his First Tuesday series of conversations with special guests who bring first-hand experiences in the world of politics. Pearcey shares her political insight drawn from her role as political director of the Elizabeth Warren campaign.

“[Working as a political director] is something different every day,” says Pearcey about what drew her to her career. “It’s making sure you have a plan if X-Y-Z happens, and you make decisions very quickly. That’s what I like about it.”

“When I was in college, this wasn’t a professional line that I understood or knew about. I took a job straight out of college… I went not knowing anything…and I got the bug. My mission was to go wherever there was good work and find out which candidate [I] like the best.” 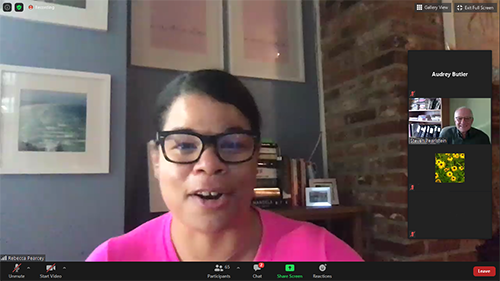 There is no doubt Pearcey’s position as political director is a critical role during a candidate’s campaign, and during the conversation, Professor Pearlstein commented on the diverse areas her job covers, asking, “What don’t you do?”

When Pearcey first began work on the Warren campaign, her job was to “liaise and advise the senator” on matters of public relations and creating teams to network and gather support. As time went, however, Pearcey saw her job evolve to organizing constituencies, surrogate scheduling, managing delegates, and even traveling personally with her candidate. “It is a lot of everything, [and] it’s what you make it.”

In addition to carrying out the extensive tasks as political director, Pearcey has also faced the struggles of breaking into a profession dominated by white men.

“As long as I can remember, when I started becoming senior staff, I was the only black person in the room and also the only female in the room... I’ve made it a point to talk to younger staffers… about what the dynamic was like 20 years ago, versus what it is now…and how to place yourself in a position where you’re comfortable, [where] you’re heard, and you understand what your power is and what levers to pull to get the power and make the decisions.”

Since her last campaign, Pearcey has joined the board of the iVote Civil Education Fund, helping launch an “effort to encourage people to vote early, from home, by mail – any of the different ways people can vote since the pandemic.”

“Since May… 35 states have changed the laws on what it takes to vote,” says Pearcey. “There are literally millions and millions of people who may be face with new challenges to vote and so our effort has been focused on making sure people have the tools necessary to get it done this November.”

The First Tuesday series continues on Tuesday September 29th  from 9:00 a.m. until 10:15 a.m. with Rick Wilson, a Republican media strategist, as well as co-founder and “creative genius” of the Lincoln Project.  The First Tuesday series is sponsored by the Honors College and the Schar School of Policy and Government. The events, which are coordinated in conjunction with Pearlstein’s Honors 131 course, are open to all members of the Mason community: register to participate.

Watch past events in the First Tuesday series