Mike Henry: What Does a Campaign Manager Do? A Lot!

“Politics is a young person’s opportunity. It’s a great profession [where you can] work for committed people who try to move the country or your locality forward.”

That was one of the insights shared on September 15 by longtime campaign manager Mike Henry during his (virtual) appearance as the guest of the second installment of First Tuesday, a series of conversations with political insiders hosted by Robinson Professor of Public Policy Steven Pearlstein and sponsored by the Honors College and the Schar School of Policy and Government.

Mike Henry began his political career in the district office of Virginia Senator Chuck Robb (D), a former Distinguished Visiting Professor at the Schar School, and later worked for Virginia State House Democrats. In addition to being a campaign manager for two Virginia senate candidates and three congressional candidates, Henry was also the deputy campaign manager for Hilary Clinton (D) in 2008 and then worked with Virginia’s Tim Kaine (D) through his races for governor, senator, and vice president. 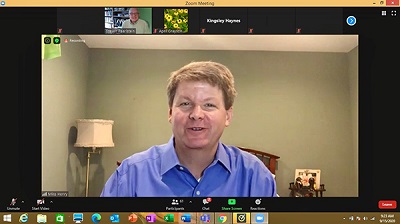 “I remember as a young kid watching a black and white television the day Richard Nixon resigned…I realized something big was happening,” Henry said of his initial inspiration. “That was the first time I remember being interested in politics.”

A campaign manager oversees a broad range of aspects of a candidate’s run, he said, from managing people, money, and press, to developing and executing strategies to give their candidate the exposure they need.

“When I’m managing a race, I try to take as many decisions off a candidate’s plate as possible,” Henry said. “[The candidate has] a lot of different pressures that I don’t have to worry about.”

Looking forward to the 2020 election, Henry noted “the dynamic is completely different” in this race compared with President Trump’s last run for president. “Whenever someone runs for re-election as president, normally [the campaign is] a referendum on their past four years,” he said. This time, not so much.

The First Tuesday series continues Tuesday, September 22 at 9 a.m. until 10:15 a.m. with Rebecca Pearcey, political director for Elizabeth Warren’s presidential campaign. The events, which are coordinated in conjunction with Pearlstein’s Honors 131 course, are open to all members of the Mason community: register to participate.

Watch past events in the First Tuesday series