Incoming freshmen are first recipients of the I-Achieve Scholarships

Kristen Alleyne and Elene Lipartiani, incoming freshmen at George Mason University, have been honored with I-Achieve scholarships for academic excellence. The awards are being given for the first time this year, as part of a grant Mason received from the Jack Kent Cooke Foundation last fall.

The scholarships are intended for students who graduated from Mason’s Early Identification Program (EIP) and will be attending Mason as University Scholars in the Honors College. EIP is an extensive outreach program for first-generation college students in the Northern Virginia area. EIP provides access to educational resources for students from seven local public-school systems and is intended to equip students with skills that will help them become lifelong learners, leaders and responsible global citizens.

“The scholarships enable Mason to attract and retain some of the most motivated first-generation students who have completed Mason’s EIP program,” said Richard Todd Stafford, director of communications for Mason’s Honors College.

“Both of these students have impressive and interesting credentials,” said Eva Bramesco, associate director of undergraduate admissions and director of the University Scholars Program. “They blow you away with what they have already accomplished.” 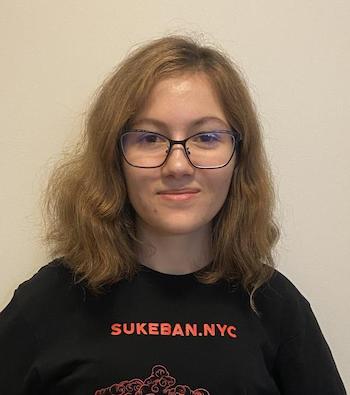 Khaseem F. Davis, EIP director, said that both students will do well at Mason.

“Their intellectual curiosity, hard work and pursuit of excellence were evident from their first day in EIP,” Davis said.

Lipartiani, 18, moved to the United States from the Republic of Georgia in 2007.

“It was an experience,” Lipartiani said. “I didn’t completely understand the language or the cultural aspects of being in the U.S., so I did end up feeling a bit isolated.”

Lipartiani ended up as an EIP student, making friends and finishing Oakton High School with a 4.2 grade point average and an interest in mental health and psychology.

“I love understanding people and what makes them tick, getting into their brains and being able to help them,” said Lipartiani. She wants to study neuroscience to help find a cure for Alzheimer’s disease.

An EIP student, Alleyne graduated Washington-Liberty High School as a valedictorian and is a member of the National Honor Society. She served as president of her school’s Black Student Union and captain of the track and field team.

Alleyne plans to study community health at Mason and wants to become an epidemiologist.

“When the Ebola virus was rampant, I was fascinated with trying to understand how it spread and how different countries were containing it,” Alleyne said. “Now with COVID-19, I am really seeing how important epidemiologists are. It involves a great combination of science and leadership skills.”

Bramesco said that both Alleyne and Lipartiani received the I-Achieve scholarships because of a belief that “they will go on to do great things.”

“It is an investment in their future,” Bramesco said.