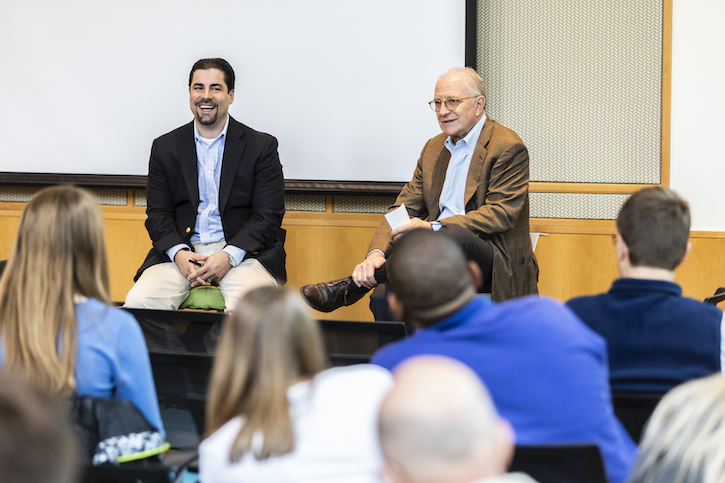 Political campaigns are complex—even for political scientists. For students studying the field, understanding what is happening behind the scenes of a campaign can be difficult. For the average citizen, the confusion can be even greater.

That’s why Steven Pearlstein created the First Tuesday speaker series. The Robinson Professor of Public Affairs at George Mason University hopes it can help broaden perspectives on politics and challenge misconceptions that lead to political cynicism.

“The purpose here is to give students a sense of what campaigns and elections are like from the inside,” said Pearlstein, a Pulitzer Prize-winning journalist at The Washington Post who hosts the series in conjunction with his Mason seminar course [HNRS 131 Contemporary Society in Multiple Perspectives].

Pulling the curtain back on campaigns has an often-unnoticed value, he said.

“[Political scientists] come up with mathematical models of elections that make it seem as if whatever the outcome is it’s inevitable,” Pearlstein said, adding that they don’t factor in how the campaign is run because of its nuanced intricacy. “They have a model about how campaigns and elections work that essentially ignores how good or bad a campaign is—this course is the antidote to that.”

Sponsored by the Schar School of Policy and Government and Mason’s Honors College, the First Tuesday speaker series (named for leading up to Election Day, the first Tuesday in November), pulls in experts from both sides of the political spectrum.

This year, students, faculty and community members will hear from a list of high-caliber professionals including:

·      Tom Davis, former Republican Congressman from Virginia and former rector of Mason’s Board of Visitors

The candid discussions about how elections are won and lost “lift the curtain behind the buzz words, and messaging the public is spoon fed,” Davis said.

It’s a worthwhile experience for students and the speakers whom Pearlstein interviews.

“I have learned just as I have shared, with students asking interesting questions and imparting well-informed views,” said Diaz, BA Communication ’00. “The exchanges are valuable because they allow political strategists the opportunity to address moments in time within the electoral system, while also providing context concerning how it can be viewed based on history, trends and experience.”

The series held every two years, during election cycles, will be virtual this year and is open to all via Zoom on Tuesdays at 9 a.m.: http://schar.gmu.edu/firsttuesday

“[It’s] well worth attending,” said Jim Pfiffner, professor emeritus in the Schar School who attended in 2018. “[Pearlstein] is an excellent interviewer and brings out interesting facets of [the speakers’] deep experience in politics.”

The hallmark of the series and its accompanying course is its hands-on nature. Keeping up with the news replaces a textbook, and students get paired with a Virginia voter who holds a different ideology than they do. Once a week they discuss the presidential race with that voter, and explore those conversations as a class.

For politically inclined students, the experience is unparalleled.

“There are very few schools in America that could get all these people on a speaker series like this,” Pearlstein said. “Only [schools] in Washington can easily do that, and I don’t think any of the other Washington schools do it to this degree.”

“What I hope students will see is that there’s a lot of very smart and experienced people who do campaigns at a high level,” he said. “It is somewhat of a science, but it’s also an art. And campaigns matter.”